Merlo and Agrifung have a Deal

By Michele Catinari
May 10, 2021
Construction EquipmentTelehandlers

Ever since its first telescopic handlers in the 1980s, Merlo has always aimed at the versatility of its ranges. The bright green telehandlers, among other products, have become so widespread thanks to the Cuneo-based company’s ability to communicate the value of its equipment. In fact, Merlo telehandlers are used in a wide variety of applications due to their ability to carry out jobs that other machines would not be able to perform. All this, of course, with a high level of efficiency. This is why AGRIFUNG based in Trevignano (TV), Italy, decided to buy a Merlo TF50.8T-170.
In fact, the company relied on dealer Abramo Mason srl with whom it has been working for several years. The TF50.8 is a telescopic handler whose task is to take care of the logistics of compost formation for mushroom beds. This is a long process made up of various phases in which straw, chicken dung, and horse manure are skillfully processed to obtain the precious component required for growing ‘champignon’ mushrooms. This virtuous process is where the advantages of the Merlo TF50.8 provide important added value to productivity and business efficiency. The lifting capacity and agility in narrow spaces ensure that each stage of the process can be completed by simply changing equipment. Compact size and optimal all-round visibility provide high operational safety. The ability to move around and inside the sheds for compost handling is an important operational aspect. The telescopic boom also allows you to quickly reach the farthest corners, ensuring efficiency in the process.

Agrifung is based in Trevignano, near Treviso, Italy. Since 1969, the company has been producing compost for growing ‘champignon’ mushrooms using a controlled process. Straw, horse manure, and chicken dung are used to make compost that becomes the substrate for the growth of the valuable mushrooms. The Merlo TF50.8 is an integral part of the process, immersing the straw bales in black water. At the end of the immersion period, the bales are stacked in an area where fermentation begins. All the water resulting from the process is channeled into a closed circuit to be oxygenated and used several times without impacting the surrounding environment.
The bales ferment naturally for a set period of time, after which the Merlo TF50.8 removes them and brings them to the shredding machine. Both the stacking and the subsequent pick-up are possible thanks to the load capacity and the maximum height that can be reached. In fact, the Merlo telehandler has a fundamental feature that sets it apart from its direct competitors in the same class: it has a load diagram that provides maximum capacity at maximum height. This allows it to operate in complete safety in any operating context.
Agrifung and Merlo, significant figures
Agrifung’s production achieved significant figures placing the Trevignano-based company in a leading position in the market. Both the Merlo TF50.8 and a P38.12 stabilized telehandler, which is used for maintenance operations, operate within the production site. The latter machine was also supplied by dealer Abramo Mason srl.
This machine is in fact equipped with an aerial work platform for working at height, an approved hook for lifting and handling, and other equipment for replacing plant parts. These are two machines that, thanks to their versatility, allow Agrifung to be continuously efficient. The “Francescutti method” used for growing mushrooms in fact requires a continuous flow of material in the company’s production, a demanding work pace that requires reliable machines. The Merlo TF50.8 meets Agrifung’s requirements by operating alongside large wheel loaders at the same operational pace with the same degree of reliability. 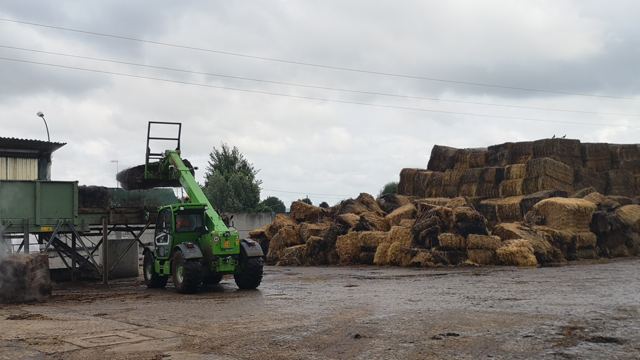 Waratah Upgrades HTH618C: New Series-III is all About Productivity, Reliability and Uptime