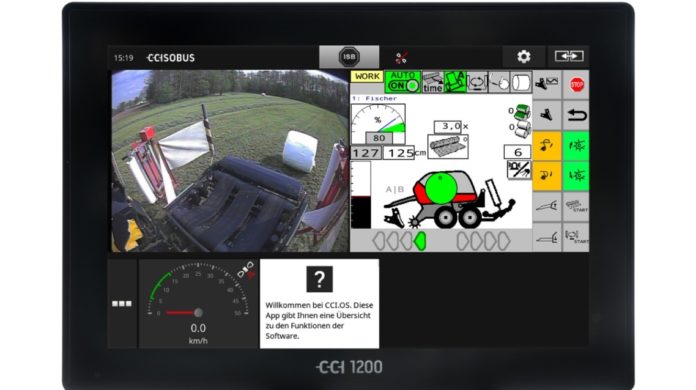 Pöttinger‘s new CCI 1200 ISOBUS terminal makes sure you have everything under control, even after a long day in the field. The terminal enables the professional operation of all ISOBUS-compatible machines. 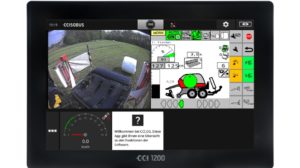 The new 12″ CCI 1200 ISOBUS terminal offers the user a comprehensive function package. Because it has a touchscreen and you can use it as a tablet, it is intuitive to use and is extremely convenient. The menu system is very straightforward and only a few taps of the screen are needed. The integrated ambient light sensor automatically adjusts the brightness of the display so that it is easy to read in direct sunlight, or at night.

The advantages at a glance

Thanks to the flexible layout of the screen, the display can be positioned either horizontally or vertically. The screen can be split flexibly too so that several applications can be displayed simultaneously in different sized windows. This enables a seed drill with several metering units to be monitored easily and conveniently in a large format.
A camera image can also be displayed alongside the machine data. For example, you can easily keep an eye on unloading in the clamp or the wrapping sequence on a baler/wrapper combination.
The innovative help system enables the driver to find out more about the applications that are currently open, their functions and their settings, at any time.
The new, intelligent CCI 1200 terminal can be used for all your ISOBUS machines regardless of manufacturer. Pöttinger’s ISOBUS compatible machines include the NOVACAT X8 and A10 mowers, the TOP 1252 C rake, the FARO, EUROPROFI, TORRO, JUMBO, and JUMBO COMBILINE loader wagons, the PRO series round balers and the VITASEM, AEROSEM and TERRASEM seed drills.
The CCI 1200 terminal also supports many functions that are needed for SEED COMPLETE, Pöttinger’s complete precision farming package: 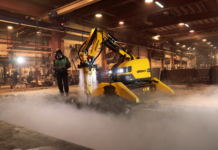 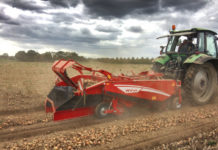 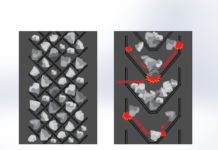 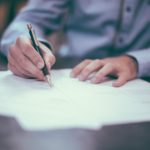 Michele Catinari - April 3, 2020
With the April 1 implementation deadline looming, the Western Canadian Wheat Growers are calling for the federal government to eliminate the move to increase... 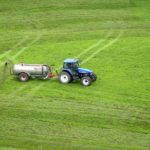 Fertilizer Canada urges the Government to Federally Mandate the Fertilizer Supply Chain as an...

Michele Catinari - March 31, 2020
Fertilizer Canada is urging the federal government to designate the entire fertilizer supply chain as an essential service and provide relief to workers who... 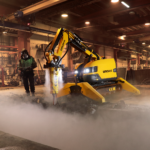 Covid19: Perenti makes all to minimize any disruption. The Group stay...

The global planting equipment market size has the potential to grow...