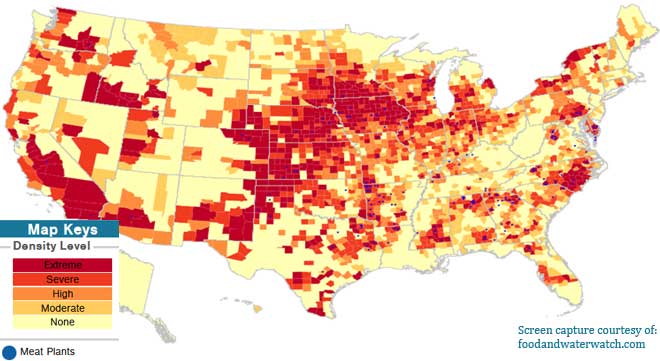 If you find this image disturbing as your heart goes out to the US citizens who live and work in these animal sweatshops, you may find it interesting that Canadians are really no better off. Canadian livestock produced approximately 164 billion kilograms of manure in 2001. That amount of manure would fill Toronto’s Rogers Centre sky dome stadium 103 times per year. Five thousand sow produce as much liquid manure as a city of 40,000 people, without the sewage treatment systems required of municipalities.

It is difficult to determine the actual number of animals being reared in intensive livestock operations (ILO) because there is no unifying federal definitions and there are few directly comparable definitions of ILOs in Canadian provinces. Each province defines its own legislation and regulations. And while the permit and siting processes for livestock operations and manure storage are regulated by the provinces, they are enforced by the municipalities. Canadian provinces have legislation that requires building permits for large farms, but these permits rarely require environmental studies (excluding Alberta and Quebec).

The Veterinary Drugs Directorate of Health Canada is researching the use of antibiotics in Canadian factory farms. We don’t know how much is being prescribed for disease treatment versus for growth promotion or disease prevention. Antibiotic residues in meat can cause allergic reactions and may lead to antibiotic resistant bacteria in the human gut.

The Canadian Medical Association has asked governments for a moratorium on the expansion of industrial hog production until scientific data on the attendant health risks are known. Air pollution from hog mega-barns contains more than 150 chemicals which can effect human health, causing nausea, headaches, sleep disturbances, loss of appetite, and respiratory problems.

We need to become better consumers. That means becoming an informed consumer so we can select our groceries with more care. Control of what we eat is in the hands of a few multinationals and they don’t have the consumers’ best interest in mind. They are powerful and politically connected. They operate with impunity often controlling all or part of the entire process – from the raising of animals or crops to processing and distribution.

And, you may well ask, where is our governments in all of this? North American governments are both facilitators and barriers to the development of sustainable agriculture. There is little political will in Canada to disturb the bureaucracy that is in place to manage all the potential trade. Nor is there the political will to stop providing incentives for unsustainable practices which discourage the development of alternatives.

In a society where 3% of the population produces food and 97% are consumers decisions and actions which ultimately affect our wellbeing are made external to rural farming operations and the consumer at large.

While this largely unregulated market presents unlimited opportunities to large corporations, concerns about the quality of their food and the effects industrial farming have on our personal health, the environment and our farming communities are disturbing at the very least. If we care about our health, our family’s well being, the environment and our farming communities we need to rethink food. Become an informed consumer. Ask where the meat comes from and if it was raised in a sustainable manner in respect to the animals that feed our families.

michele - January 16, 2020
GK Machines will exhibit at NW Ag Show. The NW Ag Show is in Salem at the State Fairgrounds for its second year at...

michele - January 16, 2020
AUSA, a company that specialises in the design, manufacture and sale of compact all-terrain industrial vehicles, has signed a 10-year commercial agreement with the...

Naïo Technologies accelerates next growth phase with a new funding round of € 14...